On September 13th, Bill Bushey and I co-organized ClimateHackTC, a four-hour experimental event inspired by a global hackathon challenge called Hack4Good: Hack Against Climate Change (#Hack4Good). We threw together this smaller-scale event (in two weeks!) to start a conversation about solving climate-related problems with climate activists/concerned citizens and the civic technology community together. I was delighted that 21 people showed up on a Saturday to talk about climate hacking. I was also extremely impressed by the projects presented, the participation of everyone in the room,and the passionate interest and willingness to learn that people brought to our little event. And, folks who were unable to attend sent some great ideas as well as data sets to get us started.

Fueled with excitement from the overwhelming success of our local ClimateHack, last Sunday on September 21st I joined 400,000 people in the streets of Manhattan for the largest climate march in history. More than 1,500 groups gathered in a lineup over a mile long, organized in 5 broad themes that together tell the story that climate change is real and impacting communities, that we can and must use solutions we have to build the future, and that to change everything it takes everyone. My experience there reiterated the very same lesson I took away from ClimateHack: we need to tell stories, we need to take action, and we need everyone. 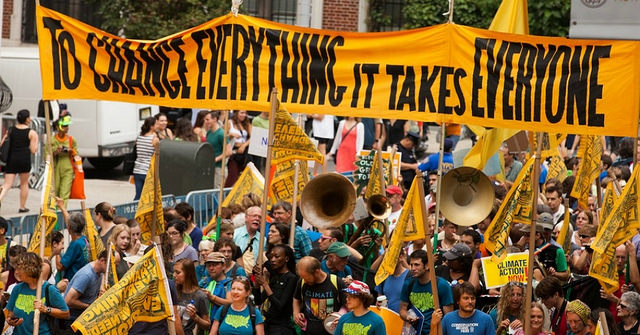 People’s Climate March in NYC: To Change Everything It Takes Everyone, photo by South Bend Voice via Flickr

ClimateHackTC was held at the Hothouse coworking space inside the Minneapolis Institute of Arts and began with introductions and a conversation about what people hoped to get out of the event. Many people said they had signed up for the event to learn more about what’s going on in terms of solving climate-related problems and also to find a way to participate or contribute to climate work.

Next we had a staff-guided tour with Krista Pearson through a current exhibition titled The Nature of Nature, which explores humanity’s evolving relationship to nature. One of the pieces, Beneath the Ground, featured soil profiles and aimed to “bridge the difference between human and geologic time” by showing how “our lives intersects with the life of the planet” underground. This piece helped highlight one of the biggest challenges for humans dealing with climate change- that geologic time is so big the human brain has a hard time holding the scale of climate in our heads, that we can’t see direct cause and effect of our action (or inaction) on our human scale.

After the tour, there were brief presentations of local climate-related projects created at previous hackathons. Jacob Dalton presented Trojan Horseradish, a map showing where food is grown in Minnesota that (in conjunction with a set of other maps) won Best Mashup at Capitol Code, Andy Walz presented the Minnesota Solar Suitability Analysis app that won at the Esri Global Disaster Resilience App Challenge 2014, and Richard Barnes talked about OMG Transit, AirStatus, and My Future Climate, which actually won 1st Place Overall and the Personal Impact and Compelling Visualization category in the Hack4Good hack against Climate Change global hackathon challenge that inspired this event. 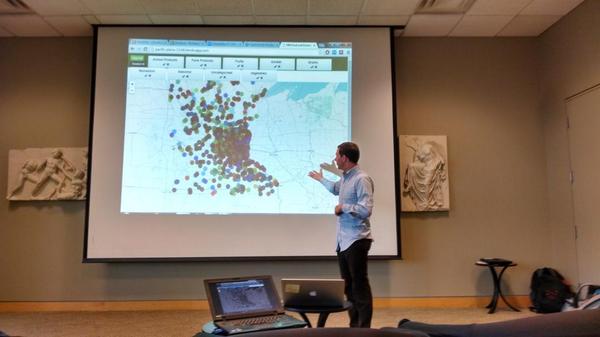 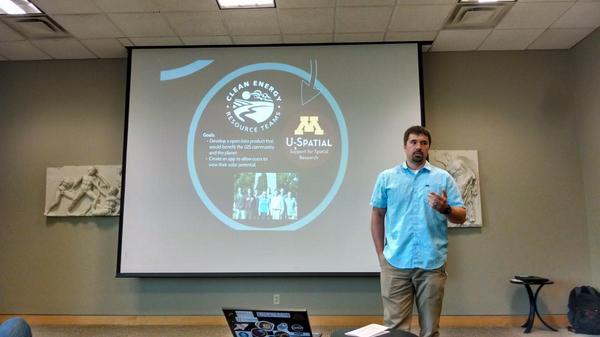 Each presenter also talked about the process of developing a project at a hackathon to help those who have never been to one understand what kinds of problems get solved, what to expect in terms of a product developed, and the challenges of what to do next when the hackathon is over. Presenters talked about the “maker mentality” and how hackathons provide a place and the energy to amplify the passion that drives developers to create these projects in their free time. They talked about how teams work both together and separately to produce something in a day or a weekend, and about how what they create can help people do “analysis from their couch” that can help them make decisions. Richard gave a great primer on how to be successful at hackathons, highlighting the importance of preparation in terms of people, languages, data, and machines. Bill followed with additional notes on the importance of documentation and how familiarity with open standards can be helpful, as well as a brief overview of what an API is and why it’s useful.

We closed the scheduled portion of the event with a brief presentation on what action is being taken on climate. I briefly summarized the work as I see it in four broad categories: understanding the scope and scale of problem using indicators and climate models, mitigation efforts to reduce emissions that cause the problem, adaptation efforts to deal with impacts we are already seeing and expect to see, and climate justice efforts that focus on minimizing the disproportionate impacts of climate change on poor communities, communities of color, and developing countries. I then talked about trends of big data, crowdsourcing and citizen science, and data visualization being used as mechanisms to do this work. The presentation and links to some interesting data sets in these categories can be found in a digital handout here.

We ended the day with an engaging group discussion of ideas and potential next steps. Many folks said at the beginning that they came because they were interested to learn how they could contribute or participate in climate issues. Our conversation seemed to converge on the necessity for a community of folks broader than programmers that has contextual understanding of issues, the ability to ask good questions and frame problems, and diverse skills and knowledge to contribute- including journalists, artists, specialists, and others. With well-defined problems, we can then “unleash the builders”, activating developers to create solutions within this broader context we identify and with built-in interest in using whatever is developed beyond a hackathon weekend. We also had a great conversation about the importance of creating a narrative, telling stories, and helping people make a personal connection to understanding the impact of their actions so that they can choose to change their behavior.

This event was meant to be the beginning of a conversation. So what’s next? In the long-term, I would love to see an Open Twin Cities hackathon with climate as a theme. From this conversation, we have learned that there are amazing local people out there who are interested in this, and that there is preparation work that we can do in order to make a climate hackathon successful. In the shorter term, I would like to work with Open Twin Cities to set up some kind of online space or support for our group to keep in touch, share climate hacking information, collect relevant data sets, and grow our community. I plan on asking attendees if and how they might like to stay involved and going from there. If other folks have suggestions or ideas or just want to join the conversation, let us know! Tweet at us with the hashtag #ClimateHackTC or e-mail climatehacktc@opentwincities.org.

Special thanks to Sarah Lutman at HotHouse, Krista Pearson at MIA, Steve Clift at e-democracy, and Rob Davis at Fresh Energy for their support.