Start of the hack day, photo by Rob Davis

Saturday June 20th was the first annual Twin Cities CycleHack event. CycleHack started in 2014 in Glasgow, Scotland and this year it has become an international effort to make the world more sustainable through reducing the barriers to cycling. The inspiration for CycleHack Twin Cities began with a visit from one of the Glasgow founders, Johanna Holtan. She came and talked at an Open Twin Cities meetup about what they had done in Scotland, and the idea was born to do a CycleHack here in Minneapolis. Which, by the way, is currently the only US city to make it into the top 20 in the Copenhagenize Index of bike friendly cities around the world.

To kick off our CycleHack, we started with some ideation to figure out what keeps people from riding bikes here in the Twin Cities, brainstormed ways to address those issues, and then we had a full hack day at the Hack Factory where we worked on some hacks to address the things we identified.

By the end of the hack day, we had several groups create some incredible projects! For more pictures and stories, check out [@CycleHackTC] (https://twitter.com/cyclehacktc) or our hashtag #CycleHackTC.

One of the barriers identified was the concern that drivers don’t see cyclists or don’t know what they plan to do. This group prototyped an LED turn signal that would be placed in a mesh pocket on the outside of your backpack, so that drivers behind you could see when you plan to turn. It also has a signal for stop. Source code for Signal 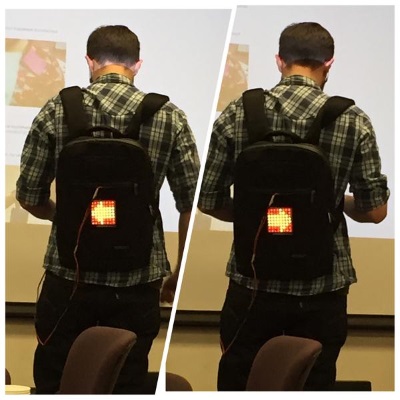 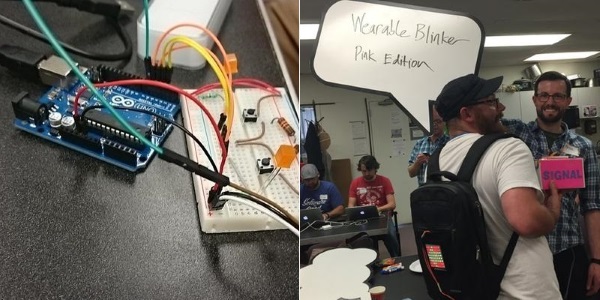 One group was interested in finding a better way for cyclists to choose routes using data that shows where cyclists actually ride. The thought was that Google Maps will give you a bike route, but won’t tell you if a road is in poor condition or has heavy car traffic. The group used bike trip data from Strava, a way for users to upload comments or recommendations, and they added some collision data from a [ten year study from the city of Minneapolis on vehicle/bike collisions.] (http://www.minneapolismn.gov/www/groups/public/@publicworks/documents/images/wcms1p-102346.pdf)

Bill worked on thinking through how it might work to collect data on whether bike racks on Metro Transit buses were available or in use. Starting with the physical question of how a sensor could be used to determine if bikes were already on the bus, he then considered how to get the data to transit users with bikes and how the system could get set up.

Bill discussing how the bureaucracy might deal with this technical solution to the problem, second photo by James Keuning

A couple of us organizers (myself included) decided an hour before the end of hack day that we wanted to hack something, so we considered when you want to go out but don’t want to take a bag and you need to carry your phone, wallet, and keys. We recruited another team member and used a sewing machine to create a little clutch that we call the bike brand bike clutch that attaches to the front of your handlebars with velcro. It also has the word “bike” (hence the bike brand) on it, and the dot over the “i” is an LED, so it’s also a headlight.

This group was working on the problem that not knowing your rights or the law might keep people from biking, so they prototyped a spoke card that reminds cyclists of their rights and responsibilities on one side, and has a checklist on the other side with the appropriate steps if they are in an accident. 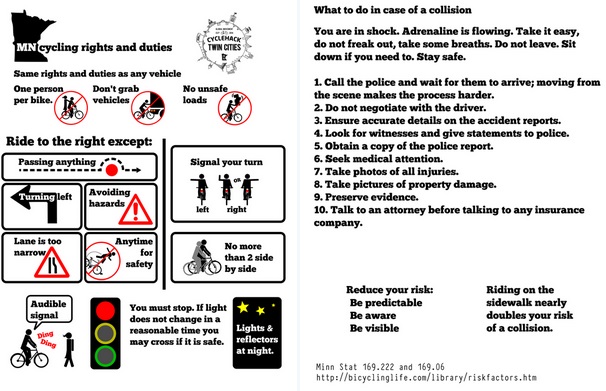 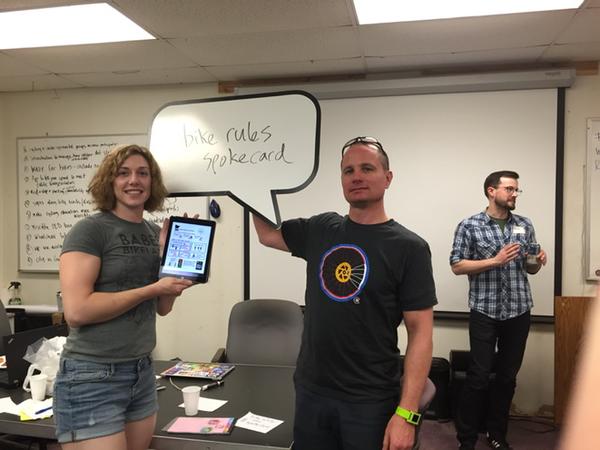 One team had people who had to leave early so they didn’t present, but they worked on LEDs embedded in a bike helmet with programmed controls to create turn signals. Video 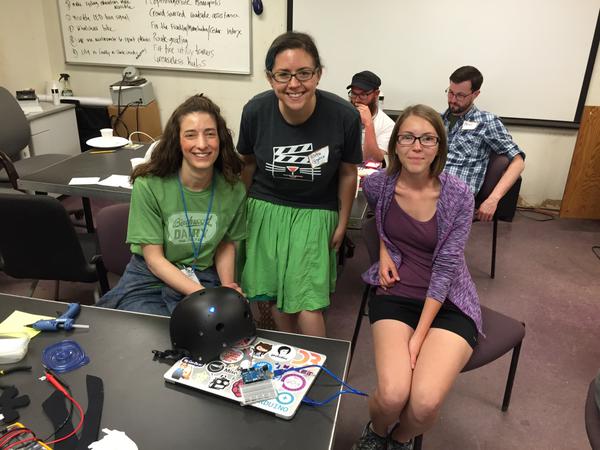 There were other projects worked on by folks that couldn’t stay; some of them were uploaded to the global CycleHack Catalogue.

The Hack Factory was an amazing donated space for our first CycleHack. They had equipment and tools galore (including a laser cutter for trained members to use), and everyone there was open and helpful. They were gracious hosts with “anything goes” and “figure it out” attitudes. We had materials donated by In the Heart of the Beast Theater, Ax-Man Surplus, and numerous friends and family so that people had all kinds of things to use for hacks, which really set the tone for thinking outside the (bike) box.

We spent some time before the hack day brainstorming barriers to cycling and ideating hacks that would address the barriers we came up with. We asked folks when they registered to let us know if they had ideas to hack on, and we also had an Ideascale for people to post ideas and also vote on other ideas that were posted. We tabled at the Twin Cities Maker Faire, where we asked people to think of any issues that may keep people from choosing to ride their bike. We wrote the barriers on index cards, and sorted them into six categories of things we could hack: the bike, the environment, the cyclist, clothing, navigation, and culture.

Brainstormed barriers, ideas to address the barriers, and suggestions for hacks

On Friday evening before the hack day, we did an ideation bike ride around the neighborhood to come up with any and all ideas for ways
to address some of the issues we had collected in those six categories. At the start, we did brief introductions and then our ride lead Michelle and our volunteer ride mechanic Brian Fanelli from Recovery Bike Shop explained the rules for the ride. Then the group set off to the first stop, at the green institute building off of the Greenway. At this stop, we split into groups and each took a barrier written on an index card, and we took 10 minutes to brainstorm hacks to solve the issue on the card. The two categories we did at this stop were hacking the bike and hacking clothing.</br>

From there, the group headed to Brackett Park, where we thought about hacking the environment and hacking navigation. Then onto the last stop at the Hack Factory, where we discussed hacking the cyclist and the culture. Throughout the evening we had some great (and some crazy) ideas and discussions. We talked about what it means for an intersection to be “good” for cyclists, how to keep from getting sweaty on your way to work, some of the current cycling infrastructure efforts in the neighborhood, and tons of other things. One of my favorites was in the conversation about hacking the culture, and the problem that drivers seem to hate cyclists (and vice versa!). We recalled the idea of reframing how we talk about cyclists to “people on bikes” and drivers to “people in cars”, because it leads to a more civil debate, but also because here in Minneapolis, often people go back and forth between the two. We also talked about who identifies as a cyclist (kids, hipsters, lyrca dudes) and how it would be great to widen that to include all people who ride their bikes, independent of how much or how little they ride, what they wear, who they associate with.

One of the attendees, Rachel, brought two bikes she had hacked before CycleHack to demonstrate. One was a backwards steering bike, and the other was a swing bike. Some of us tried out the swing bike!

At the beginning of hack day, we heard from Jason Tanzman at Cycles for Change, a community bike shop in St. Paul working to to build a diverse and empowered community of bicyclists. They recently merged with SPOKES Bike Walk Connect, a similar organization in the Seward neighborhood working on the goal of getting more people biking and walking. Our ideation ride went past SPOKES, and its founder Sheldon Mains was on the ride, sharing his hyper-local knowledge of activities and infrastructure initiatives that are going on right now. Both Cycles for Change and SPOKES have been working to reduce barriers to cycling in the Twin Cities, and it was great that they could be involved with CycleHack. The Twin Cities has a vibrant cycling community with many types of interests in improving the cycling experience here. 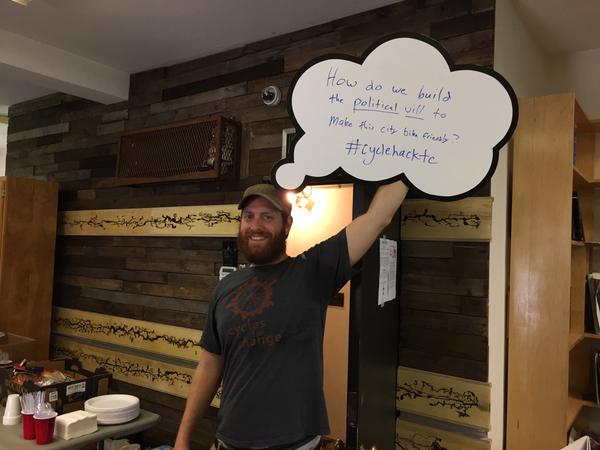 Jason Tanzman from Cycles for Change, photo by James Keuning

The conversations, the projects, the people, our supporters, everything about CycleHack was incredibly inspiring and I think provided a unique addition to the existing efforts to improve cycling. After months of planning (that should have started much earlier than it did), it was really great to see everything come together and to see people so excited and invested in the spirit of the event. I hope that this hack day connected people to this amazing place we all live in and to each other. I also hope that the conversations and ideas we had were just the beginning of an ongoing discussion to keep thinking up innovative ways to make things better and easier for people on bikes (which we now call POBs) here in the Twin Cities.

CycleHack Twin Cities couldn’t have happened without the generous support of our sponsors, so thanks very much to all sponsors and partners! 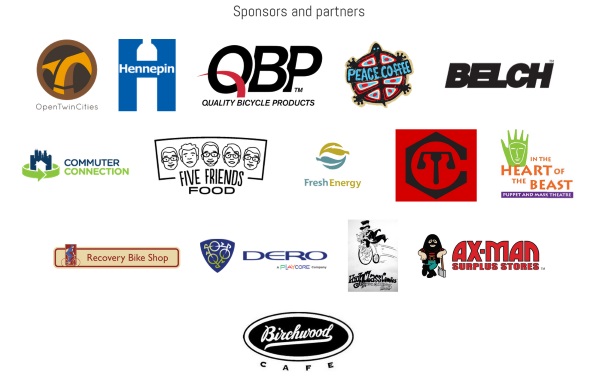 Special thanks to Kelly Clausen at Hennepin County and Bill Bushey at Open Twin Cities for their unwavering support (and Costco memberships).

Also, mad props to the organizing team:Leah Puffer, Alan Palazzolo, James Keuning, Laura Anderson, and myself. We did it, you guys!!!